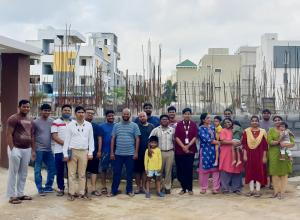 HYDERABAD, TELANGANA, INDIA, July 9, 2022 /EINPresswire.com/ — On April 6, 2022, a wall unexpectedly appeared in the middle of the neighborhood’s access route to the Ameenpur-Beeramguda Road, shocking the locals. Due to public engagement and cooperation with the state government and municipal authorities, the Hakku Campaigns have had an impact. Ameenpur’s current campaign is titled “Wall Against Citizens.” The builder shut off locals from the main road by building a wall on an HMDA-approved access road. Following objections by residents of the Ameenpur, Patancheru, and the protest of the Hakku initiative, the HMDA has withdrawn the building permit of a construction business in Hyderabad.

The Hakku Initiative is a research project run by the Institute of Perception Studies (IPS), New Delhi, with a base in Hyderabad led by Dr. Kota Neelima. In Hyderabad and Telangana, Hakku Initiative has several campaigns focusing on finding solutions.
– Is the Hyderabad Monsoon Prepared?
– Sanitation Warriors of Hyderabad
– Close Drains Save Lives
– Forgotten Teachers of Hyderabad
– Women Curfew in Hyderabad
– Bad Roads and Bad Health
– Hakku Investigation on Khajaguda Hills
– Citizen Safety and Wine Shops in Hyderabad
And the ongoing campaign on Women and Water Inequality are just a few examples of the campaigns.

In April 2022, a wall unexpectedly appeared across the neighborhood’s access route to the major Ameenpur-Beeramguda Road, shocking the locals. The builder had constructed a wall to block local people’s access to the main road while occupying an HMDA-approved access route.

In a campaign run by the Institute of Perception Studies, New Delhi-based Hakku Initiative, and Hyderabad-based research group, the locals have been protesting the denial of access to the road for the last three months.

Following a protest by locals in Ameenpur, Patancheru, the HMDA canceled the building permit. The Hyderabad Metropolitan Development Authority (HMDA) took action after discovering that the corporation had occupied a route and distorted data in the brochure.

The closing of the road has had an impact on more than 1,000 nearby residents. According to flat owners, the builder promised them a thirty-foot road as part of a project that links Beeramguda and Ameenpur village but afterward broke the commitment. Locals report that he has now claimed ownership of the road by erecting a wall to block the way and is actively supporting construction work there.

The scenario has also impacted nearby industries that rely on daily deliveries, such as restaurants, grocery stores, and pharmacies. In addition to these businesses, many residents use the road to travel to work or school. This road closure has disrupted their daily schedules and will cause them to seek other transportation options.

According to Section 22 of the HMDA Act 2008, the HMDA Planning Department canceled the authorization due to factual misrepresentation. Under the regulation, the building business “gave a commitment to road accessibility” to the locals. But, building an apartment on the designated road is “blocking the road.” A copy of the order, given to the builder on June 30, 2022, was issued in this regard.

The Minister of Municipal Administration and Urban Development of Telangana, Mr. K.T. Rama Rao, intervened in the situation on the most recent episode of #AskKTR on May 8, 2022, and directed the authorities to investigate. After this intervention, the builder received Show-Cause Notices.

HMDA convened hearings at which the builder and the locals passionately argued their cases. The residents’ facts and documentation demonstrated how fraudulent representations misled them into guaranteeing they purchased the home. The promised route was blocked after they bought the site, and the local building had already begun.

The proprietor of Lalitha Constructions, Kaila Narasimha, is at odds with the residents of the neighborhood and the flat owners of “Lalitha Delight,” a two-block apartment complex that Mr. Narasimha built and marketed.

Hakku Initiative is India’s first campaign-based online platform that works on solutions with citizens and governments. The objective of the Initiative is to explore pathways for reforms in social, economic and political spheres. Modern democracies must be realigned with people. This is especially important as the weak are getting weaker and the poor getting poorer despite representation, and electoral justice promised by democracies.

Hakku Initiative is part of the Institute of Perception Studies, a New Delhi-based research institute that has worked in rural and urban distress, and reforms.