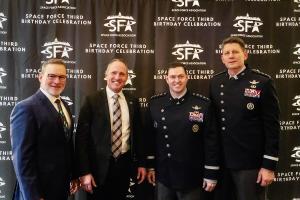 The U.S. Space Force turns three and has cause to celebrate.

D.C. SFA Chapter president, Tim Adam commented on the event by thanking those involved. “I am so proud of our DC Chapter and Board members for pulling together a spectacular 3rd birthday celebration! The attendance of General Saltzman, General Thompson, and Lt Gen Burt, and, staff from the Congressional Space Force Caucus, demonstrate the cohesiveness and partnerships we have forged to amplify the Guardian Spirit and advocate on behalf of the US Space Force. We are so grateful for our generous sponsors who enable our ability to execute such an impressive event.”

About the Space Force Association (SFA):

The Space Force Association (SFA) is the only independent, 501(c)(3) non-profit organization that serves as a professional military association whose sole focus is supporting the United States Space Force, United States Space Command, U.S. national spacepower at large, and our global partners and allies’ efforts in space exploration. Its core functions are to research, inform, and advocate to achieve superior spacepower by shaping a Space Force that provides credible deterrence in competition, dominant capability in combat, and professional services for all partners. In addition, the SFA has an essential function to provide support for the men and women of the U.S. Space Force. Membership is open to both military and civilians. For more information on the SFA, please visit ussfa.org.