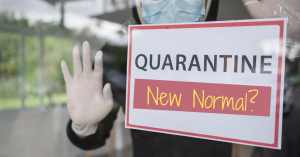 . . .climate change will spread disease faster than in the past, creating a new normal where interruption of the labor market, quarantines, and mass-disabling events . . . become more common place.”

HB 1045 seeks to establish the “Evergreen Basic Income Pilot Program,” a qualified type of universal basic income (UBI), funded by tax revenue. Qualified individuals are described in the bill as those experiencing “major life transitions or conditions associated with high economic instability.” The monthly income would equal the “fair market rent” of a two-bedroom dwelling unit in the county where the individual resides.

The intent portion of the bill provides the legislators’ reasoning. They describe situations, such as being homeless, an immigrant or refugee, a victim of domestic violence, or having a behavioral health disorder, as being economically risky.

“We agree that the life situations described can be difficult, but the proposed pilot program would not provide a solution because it doesn’t address underlying causes,” said ICWA board member Lisa Templeton. “However, we reject the bill’s assertion that climate change will spread disease faster, and we reject a “new normal” of quarantines and mass-disabling events.”

The section of the bill Templeton referred to states:

“The legislature further finds that climate change will spread disease faster than in the past, creating a new normal where interruption of the labor market, quarantines, and mass-disabling events like those seen during the COVID-19 pandemic become more common place.”

ICWA president Bernadette Pajer says, “The evidence is now overwhelming that SARS-CoV-2 emerged from a lab, not from a bat, and not because of climate change. And COVID-19 did not cause mass-disabling events; government responses did. Worse, government officials knew their responses would cause harm, but they proceeded anyway. They stoked fear of COVID, undermined early treatment protocols, disparaged natural immunity, and ignored the collateral damage of their lockdown, shutdown, mask-up, mass-vaccination measures.”

Xavier Figueroa, PhD, co-host of An Informed Life Radio, has publicly voiced his concerns throughout the pandemic. He explains that the use of policies not based on objective scientific evidence and the disregard of basic Constitutional, civil and individual rights is of great concern. “Using the language of climate change to stoke fear and provide it as a rationale for a pilot program of UBI is ridiculous. COVID 19, or any other disease, did not increase unemployment, close businesses or force people to not travel or go to work. It was the policies piloted by the CCP, supported by the WHO and implemented by the Governor and the Legislature that has led to increased poverty, homelessness and mental health decline. At no time in the history of modern public health has the draconian imposition of lockdowns been successful or needed for any disease. Yet, we are to believe that this was the correct approach. If this is the level of intellectual rigor applied to HB 1045, the outcomes will be worsened.”

Figueroa adds, “As a scientist, I look at outcomes. What were the outcomes of fear-driven policies? Not improved health, not a reduction in all-cause mortality. The outcomes have been job loss, families torn apart, friendships destroyed, and the freedoms lost that are supposed to be protected by our state and federal constitutions. To see this fear-mongering language in a piece of legislation is beyond disturbing. This legislation is cloaking itself in righteousness to solve a problem that it created and continues to worsen via the policies that they have not rescinded or recognized. HB1045 is nothing more than an attempt to hide failures and perpetuate a system that seeks to increase the dependence of state residents on the State bureaucracy. Furthermore, this legislation has the imprints of a system that will allow anyone, without proof of need, residency and citizenship, to tap into tax monies.”

Public trust in government has declined to 19%, according to the PEW Research Center, and ICWA predicts the structure and premise behind HB 1045 will drive that distrust even lower in Washington.

ICWA will be holding a “Facts not Fear” rally at the Capitol Building in Olympia, WA, on Monday, January 9, from 11am-1pm. Details can be found at https://informedchoicewa.org/event/