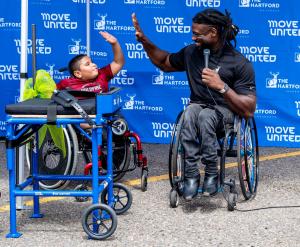 To say that I’m proud to serve on the Move United board of directors is an understatement. This is a true honor that I don’t take lightly”

ROCKVILLE, MD, USA, December 13, 2022 /EINPresswire.com/ — Five-Time Paralympian Matt Scott, who earned two gold medals and one bronze medal during his career with the U.S. Men’s National Wheelchair Basketball Team, has joined the board of directors of Move United, a nonprofit organization that is the national leader in community adaptive sports.

Scott is a five-time Paralympian in the sport of wheelchair basketball for which he has medaled three times, including most recently at the Tokyo 2020 Paralympic Games. He is a pioneer and champion for not only wheelchair basketball, but for Paralympians and athletes with disabilities as a whole, and he continues to be an outspoken advocate for inclusion and universal participation in sport.

Born with spina bifida, Scott began using a wheelchair from an early age. He pursued his love for sport by taking up wheelchair basketball at 14 years old. Scott showed early promise and talent, and he was recruited by the U.S. men’s national wheelchair basketball team directly out of high school. He has competed in every summer Paralympic Games since his high school graduation: Athens 2004, Beijing 2008, London 2012, Rio 2016 and Tokyo 2020. In addition, he also played the sport professionally in Europe.

His impact extends beyond the court as well. Scott was nominated for an ESPY, became the first U.S. Paralympian to star in a Nike commercial, appeared in Apple commercials and gathered millions of views worldwide displaying his talents with online presence. As a Team Hartford athlete, Scott has joined Move United at several events where he has been able to present adaptive sports equipment to adaptive athletes through The Hartford’s adaptive sports program.

Scott is currently working within the Visa corporation as an associate. His role within the company plays a significant part in creating opportunities for individuals with disabilities in the corporate space. At Visa, Scott has gained expertise in a variety of different roles across the organization with positions on the Global Sponsorships team, Global insights and analytics team, and global product management.

“To say that I’m proud to serve on the Move United board of directors is an understatement. This is a true honor that I don’t take lightly,” Scott said. “Move United’s mission to enable and encourage access to sport for all, no matter the level of ability, is a mission that I not only want to align myself with, but also play a significant role in making that mission a reality. I am grateful for this opportunity to be impactful in the community of people living with disabilities. I look forward to creating a brighter future for our next generation of Paralympic superstars.”

Move United uses the power of sport to push what’s possible for people with disabilities, confronting ignorance, fueling conversation, and inciting action that leads us to a world where everyone’s included. The national organization offers more than 70 adaptive sports to 120,000 youth and adults with disabilities through a network of more than 200 member organizations in 45 states.

“Including a wide range of perspectives and backgrounds throughout Move United’s staff and board is essential to our success,” said Move United’s Executive Director Glenn Merry. “Matt’s unique experience and point of view as a leader and athlete will help the organization achieve its ambitious Vision 2028 goals.”

To learn more about the organization, visit http://www.moveunitedsport.org.