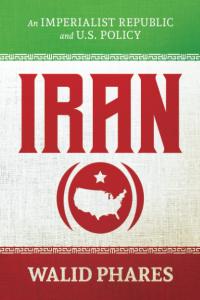 WASHINGTON, DC, UNITED STATES, January 6, 2023 /EINPresswire.com/ — The American Mideast Coalition for Democracy is pleased to recommend a new book by Dr. Walid Phares entitled “Iran: An Imperialist Republic and US Policy.” In it, Dr. Phares discusses the birth and development of the Islamic Republic, its expansion and aggression in the region via proxies, the history of its ruthless suppression of internal dissent, and above all, its masterful manipulation of US foreign policy to its own advantage.

“This should be required reading for every single policy-maker in government,” said AMCD co-chair, Tom Harb. “We’ve had a schizophrenic foreign policy toward the Middle East going back to the Carter administration. It’s time to step back and assess American interests in a cool-headed, bi-partisan manner.”

“American foreign policy toward the Middle East needs to stop the wild policy swings we’ve had in recent years,” continued AMCD co-chair John Hajjar. “Everyone who reads this book will be shocked at how extensive and deeply-embedded the Iran lobby’s reach into our government has been. Just like China, Iran has been burrowing into our institutions for forty years and is well-entrenched.”

“Tehran’s elites pulled off the most complex and sophisticated set of strategies and tactics to trigger what would become a road to the ‘Iran Deal,’” writes Tera Dahl, an investigative journalist and a former Deputy Chief of Staff at the National Security Council (NSC). “Phares dissects the interests involved in doing business with the Islamic Republic, then shows how the regime used these actors to create a powerful pressure group inside America in favor of a deal, and how the latter. in fact. ended a US policy of containment and replaced it with a ‘collaboration policy.’”

“As an Iranian-American, the most frustrating thing for me has been to watch US officials, members of Congress and even the President of the United States (Obama) bend over backward to appease the blood-thirsty and corrupt mullahs of Iran,” said AMCD co-chair Hossein Khorram. “Professor Phares lays out why that has been and continues to be the case. In doing so, he is shining a light on some dark corners of US foreign policy. He also explains complex issues with a clarity and concision sadly lacking from most commentators on this complex subject. His book is a treasure of insight and simple policy prescriptions which could have a profound impact in the future for American-Iranian relations. Thank you, Dr. Phares! This book is a must-read for anyone interested in the future of Iran.”